We’re still in that awkward phase where records are scanty, but the situation is improving.

Who Lived in the Houses?

Two snippets help to fill in some of the detail about what happened next. With the Nisbets (John and James) in possession of the large garden, the big house was let out to a succession of generally wealthy (it can be assumed) tenants. Mostly this was easily arranged by word of mouth but in 1821 Dr Wightman’s agents had to advertise. The advert shows that the then tenant was William Sandilands of Barneyhill, a former captain in the 7th Dragoons and a ‘gentleman farmer’. It’s worth showing the advert in full for the details it gives of the house:

House, gardens, etc., in Dunbar to be let.

To be let for one or more years as may be agreed on, and entered into immediately.  That large and commodious house, in the town of Dunbar, belonging to Dr. Wightman, and presently occupied by Mr. Sandilands, with two good gardens, stables, and coachhouse.  The house is well calculated for the accommodation of a genteel and numerous family, consisting of parlour, dining room, drawing room, and five excellent bedrooms, with a light bed closet to each of them, besides four garret rooms, kitchen and servant’s room, cellars and other conveniences.  The house, stable and garden, immediately behind it, may either be let separately or along with the coachhouse and the other stable and garden, as may be agreed to.  For further particulars apply to Mr. Turnbull, surgeon, Dunbar, or to Mr. Sievwright, 102 South Bridge, Edinburgh.

Pigot’s Directory of 1825-6 gives us our sole clue for the other house in this period, and that’s only by working back from the account that John Muir left:

Jane, or Janet, Kennedy occupied John Muir’s Birthplace and traded as a ‘mealdealer’; there is no information about the other tenants on the upper floors. We don’t know if there had been other tenants between her and Joseph Hogg the tobacconist.

Now, mealdealer – that’s a fairly specific occupation in a 19th century Scottish context. It meant ‘one who dealt in oatmeal’ – an essential component of the Scots’ diet but also an essential commodity in a town like Dunbar where there were many draught, carriage and riding horses stabled. Note that the demand for meal could accommodate seven separate businesses for a population of around 3000.

From now on the sources for the two houses become much greater. In his obituary of his father John Muir wrote:

‘Going to Glasgow and drifting about the great city, friendless and unknown, he was induced to enter the British Army, but remained in it only a few years, when he purchased his discharge before he had been engaged in any active service.

‘On leaving the Army he married and began business as a merchant in Dunbar, Scotland. Here he remained and prospered for twenty years; establishing an excellent reputation for fair dealing and enterprise’.

Daniel Muir, coming to Dunbar as a recruiting sergeant, met there his first wife by whom he had one child. She was a woman of some means and enabled him to purchase his release from the army in order to engage in the conduct of a business which she had inherited. Their happiness together was of brief duration, for both she and the child were snatched away by a premature death, leaving him alone.

Discussing the same events in the Life and Letters of John Muir, William Frederic Bade wrote:

There’s not a lot of detail to work with there, but let’s have a stab at filling it in. 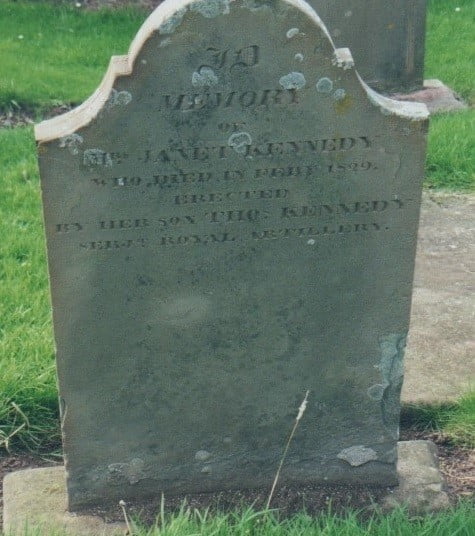 Mrs Janet Kennedy died at Dunbar on the 18th of February 1829: a point to note is that she was given the title ‘Mrs’ and her married surname in the Old Parish Record entry. That marks her as being above the ‘common class’. She had a son Thomas Kennedy, a sergeant in the Royal Artillery, who arranged for a headstone to be erected over the grave in the kirkyard.

Janet also had a daughter ‘Helen’ whose name came down to John Muir as ‘Helen’; and so she is recorded when she died and was buried at Dunbar in 1832. The entry in Dunbar’s old parish register shows Helen was Daniel’s first wife; but there is no corresponding marriage record at Dunbar. So, how did Daniel meet Helen and come to Dunbar?

Well, Sergeant Thomas Kennedy was stationed at Berwick-upon-Tweed, around 30 miles to the south of Dunbar.  A notice in the Berwick Advertiser, an entry in Northumberland Records and also the Records of Cross Border Marriages show the marriage of Eleanor Weatherlie Kennedy, spinster of Dunbar, and Daniel Muir, bachelor of Berwick, a Scot and serving soldier in the Royal Artillery. The date was 07 October 1829. It would appear that Sgt. Thomas Kennedy and Daniel were in the same unit, making Thomas the likely means of their introduction. For eight months Helen, or Eleanor, had been in charge of her late mother’s business in Dunbar. It was a relatively simple matter for Daniel to take over after they married. He then set about building the business to the state John Muir recalled. Now settled, he began to leave a documentary record:

… Daniel Muir, shopkeeper and tenant, house and shop on the west side of the High Street of Dunbar…

And in Pigot’s Directory of 1836-7 Daniel replaces Janet Kennedy in the list of mealdealers:

The young couple did not have long together. As noted above, Helen died on 01 August 1832. There is as yet no evidence of a child of the marriage, then living or dead, despite Bade’s assertion. After a decent interval, Daniel remarried. His spouse was the young Ann Gilrye who lived a few doors away on the other side of the street. Daniel and Ann were married at Dunbar on the 17th November 1833. Daniel was 29 and Ann was 20 years old.