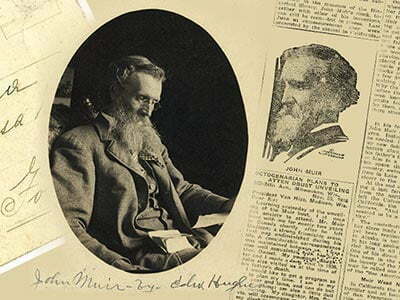 In 2014 Dunbar-born John Muir, botanist, geologist, explorer, mountaineer and conservationist, became the 38th Scot to be commemorated in Writers’ Court in Edinburgh. His flagstone carries the words: “I care to live only to entice people to look at Nature’s loveliness.” Muir was convinced that only then would folk protect the environment.
Muir sought to persuade people through his writings – letters, journals, articles for newspapers and magazines, and twelve books. The quill pen became his sword in the battle for conservation. Friends’ of John Muir’s Birthplace new exhibition, ‘John Muir, Writer’, tells how it came about.