For those reading this in the UK, Happy Mothers’ Day. Today seemed like an appropriate time to find out more about John’s mother, Ann Gilrye Muir.

Ann was born on 17 March 1813, the 9th of 10 children to David Gilrye and Margaret Hay. Her older sister, Ann died a few days after she was born, therefore Ann was christened with her sister’s name. We think the sampler on display in John Muir’s Birthplace was actually completed by the older Ann. 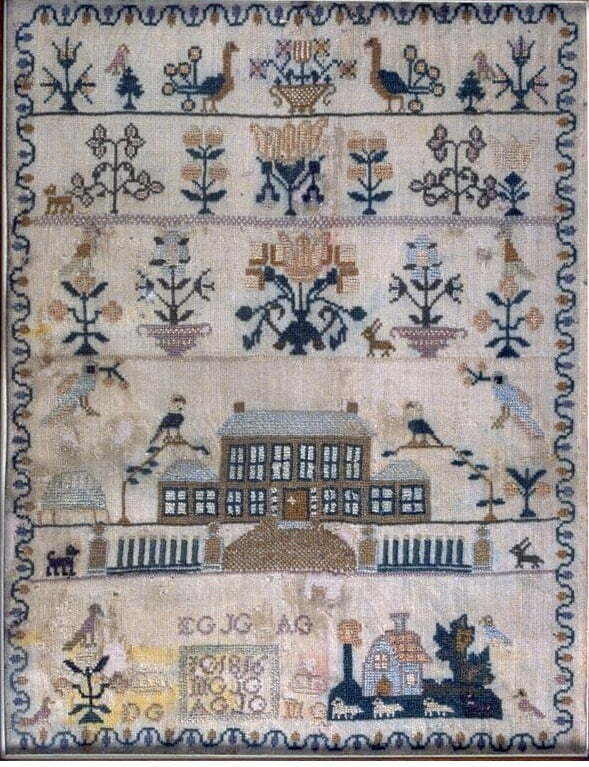 Ann lost eight brothers and sisters in her youth, mainly to tuberculosis, only Ann and her sister Margaret remained by the time John was born.

David Gilrye was a town councillor and a well respected member of the Church Community. The Gilrye’s owned a butchers’ shop at 113 High Street, where Lothian Printers is now located, and proximity to Daniel Muir’s grain business at 128 High Street is probably why Ann caught Daniel’s eye.

When the family emigrated in 1849, Daniel went ahead with John, Sarah and David, while Ann stayed in Dunbar with Margaret, Daniel and Annie and Mary until a home had been established, they followed some 6 months later.  Her eighth and last child, Joanna was born the following year in Wisconsin. Today we can only imagine what it must have taken for her to leave her family and all she know in Dunbar to follow her husband to the new world, knowing she would never return.

It may have been due to losing her own brothers and sisters at an early age, or it may have been her natural disposition, but Ann was the antithesis of her husband’s strictness with the children. She was always loving with them, although she was not beyond giving them a telling off when needed. Even when John had left home and was teaching during a break from University, she wrote to him in January 1862 sending him news from home, but also admonishing him for not writing home enough:

John It seems a long time since we had a letter from you, I would like to know how you like to be a teacher I hope you have a comfortable boarding place.

There are many letters from Ann to her children and their spouses in the collections of the University of the Pacific. In all of them she is, as most mothers, concerned with their health, and more often than not to John, giving him into trouble for not writing more often!  On his 52nd birthday in 1890 she wrote:

Time is ever on the wing, and has again brought us to see another of your birthdays. May heavens best blessings be showered upon you more and more abundantly each year of your life. I expect you are now enjoying warm pleasant weather after the wet muddy time you had in winter. We have had a very mild pleasant winter with very few real cold days.

As she got older, Ann got used to spending time alone while her husband travelled and preached, enjoying the times her children visited, often more than one at a time, and she particularly enjoyed spending time with her grandchildren. After the death of her husband in 1885, Ann lived with her daughter, Annie, who remained unmarried throughout her life.

As with his father eleven years earlier, John had a premonition about his mother’s death and travelled to be with her when she died on 23 June 1896. Ann is buried at Silver Lake Cemetery, Portage, Wisconsin.